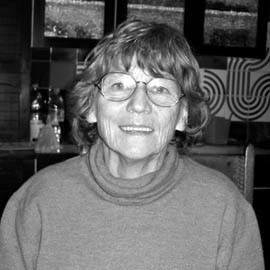 Sculptor Magdalena Abakanowicz is virtually the first, and only, Polish artist to become a major star in the international art scene. Coming from a once-Communist country, Magdalena's work generally deals with the devastating effects of socialist society on individual identity. Most of her sculptures are outdoor works consisting of one or more over-size, standing figures that are headless and hollow; she also did smaller works for galleries, such as seated figures, also headless and hollow. By the time socialism got through with people, they were mere ghosts of individuals.

“It happened to me to live in times which were extraordinary by their various forms of collective hate and collective adulation. Marches and parades worshipped leaders, great and good, who soon turned out to be mass murderers. I was obsessed by the image of the crowd, manipulated like a brainless organism and acting like a brainless organism. I suspected that under the human skull, instincts and emotions overpower the intellect without us being aware of it.” –Magdalena Abakanowicz 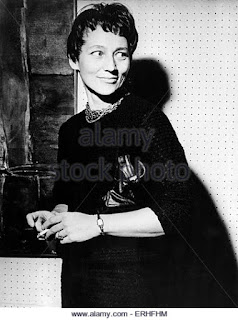 Background: Magdalena was born in Poland, the second of two girls. Her mother was a Polish aristocrat, and her father was a Russian who emigrated to Poland to escape the Bolshevik revolution. They lived in a 32-room mansion on an estate about 200 miles east of Warsaw. Magdalena has described her father as stern and her mother as aloof.

When the Germans invaded in 1939, her father joined the Polish Resistance, and her family began a series of hardships. At the age of 14, Magdalena served as a nurse's aide, and memories of her experience affected the rest of her life, as well as her art. At the end of the war, her parents sold what was left and opened a newspaper stand in Warsaw. By 1947, Communists were in full control. Magdalena continued to make her home in Poland through every hardship and change of government.

Training: Magdalena graduated the Academy of Fine Arts in Warsaw in 1955. Post-war Poland was part of the Soviet bloc and had a Communist government. Social Realism was the style taught in art schools during this era. Magdalena was forced to make art in this style in order to obtain a degree and enter the Polish Artists Union—a step required of all professional sculptors. She was also required to take several textile design classes. She lived with families who would take her in and supported herself with odd jobs at night.


Private life: In 1956 Magdalena married Jan Kosmowski, a civil engineer and scientist. For the next 11 years, Magdalena and Jan lived in one room. As a couple without children they didn't have a right to more space.

After she had some success, they were allowed to move to an apartment with 2 rooms and a small studio.


In 1988, Magdalena and Jan moved into a house of their own in Warsaw, the first time they had a spacious place to live. 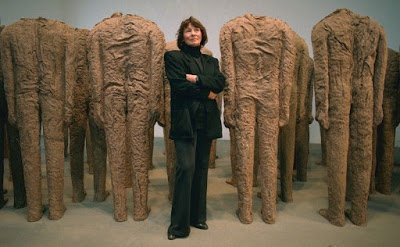 Career: By the time Magdalena graduated from the academy, Poland had begun liberalization of the forms and content of art, and to grant artists permission to travel to Western capitols to experience artistic developments outside the soviet bloc.

In 1956 some tapestry works by Magdalena were included in a tapestry exhibit in Switzerland. The works from Poland started a movement in textiles-as-art, and this was the beginning of her international reputation.

In the 1960s Magdalena created gigantic three-dimensional fiber works that hung from the ceiling. Some of these were abstract designs, but others represent fragments of human figures.

From 1965-1974 Magdalena was an instructor at a state college of arts in Poland. In the 1960s and 1970s she won several international awards.

In the 1970s and 1980s, Magdalena did a series of sculptures from coarse sackcloth that she sewed and pieced together and bonded with synthetic resins. These works were generally figurative but the forms were crudely abstracted and ambiguous. Some seated, some standing, most were headless and backless. Some sculptures were a single forlorn figure, but many of her outdoor installations feature great crowds of headless, anonymous, dehumanized figures. Magdalena has made it clear that these sculptures refer to the dehumanizing effects of being a nobody in a crowd of nobodies.


In the 1980s and 1990s, Magdalena began to translate her fabric figures into bronze, but her figures remained hollow and headless.

Agora consists of 106 figures spread over a length of 300 feet.