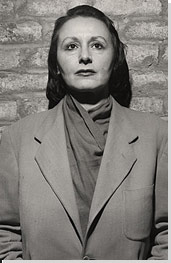 Louise Nevelson is considered one of the most important American sculptors of the twentieth century. She is famous for both her pioneering assemblages and her monumental public art.

Background: Louise was born in Kiev in the Ukraine, the second of four children. Her given name was Leah Berliawsky. In 1905 her family settled in Rockland, Maine, where her father operated a lumberyard.

Louise grew up playing with scraps from the lumberyard, and by the age of ten had declared her intention to be a professional sculptor.

Training and private life: Despite her drive to be an artist, Louise did not receive any formal art training until after her marriage. When she graduated from high school, she began working as a stenographer a law office. There she met Charles Nevelson, co-owner of a shipping business.

Louise and Charles were married in 1920, and the couple moved to New York City. There she began to study painting and drawing, as well as singing and dancing. Charles' family disapproved of her artistic inclinations.

Louise's education was again cut short  in 1924 when Charles decided to move to Westchester County, which removed her from city life and educational opportunities.

In 1929, Louise began studying at the Art Students League.

In 1931, Louise separated Charles, sent her son, who was 9 years old, to live with relatives, and moved to Europe, financing the trip by selling a diamond bracelet that her now ex-husband had given her on the occasion of Mike's birth.

She studied with Hans Hoffman in Munich, then traveled to Italy and France.

Upon returning to New York, she continued her studies with Hoffman, who had immigrated while she was in Europe. Through him, she discovered Cubism and collage, which greatly influenced her artistic development. Later she worked as an assistant to Diego Rivera while he was preparing his murals for Rockefeller Center. Since Diego was such a womanizer, their association naturally led to an affair, which caused a rift between Louise and Diego's wife Frida Kahlo.

Career: Louise had her first solo exhibition in New York in 1941. Her early works were figurative sculptures in various materials that use blockish, interlocking masses. She also began using found objects.

Louise did not ask her husband for support, and for several years she was so poor that she and Mike would gather scrap wood on the street to burn in their fireplace.

In the 1950s Louise began using these scraps of wood to make abstract compositions, in the manner of collage. She arranged the bits and pieces in rows of boxes stacked to form a shallow wall. She unified the structure by painting the whole thing a single color—at first it was always black.

Within the boxes were displayed carefully arranged and highly suggestive collections of abstract-shaped objects mingled with chair legs, pieces of balustrades, and other found objects and pieces of bric-a-brac. Many of these pieces bear mystical titles, such as Sky Cathedral.

This format turned out to be a perfect fit, and she went on to develop variations of it for the rest of her career. She was able to amplify her style by changes in scale (from small-scale to room-size to outdoor installations), colour (black to white to gold) and imagery (personal, cultural and universal). Her use of scraps was a radical departure from the endeavors of her male counterparts, like Isamu Noguchi and Alexander Calder, who worked in traditional materials like metal and marble.

A 1958 exhibition of Nevelson’s all-black environments caused a sensation. Her room-size, all-white Dawn’s Wedding Feast sculptural group garnered major recognition for Nevelson at Sixteen Americans, a group show at The Museum of Modern Art in 1959–60.

During her sixties, Louise's reputation began to soar.  She represented the United States at the prestigious Venice Biennial art fair and was honored with a retrospective exhibition at the Whitney Museum of American Art. In subsequent years, she received six honorary doctorates and continued to exhibit her work regularly in Europe and the United States. After she was on her own, Louise was active in many arts related organizations and hosted their meetings, but she didn't have other notable romantic relationships.

In 1958, she purchased a house in Manhattan's Little Italy neighborhood, where she became known by the neighborhood children.

Her closest confidantes were her friend, the playwright Edward Albee, and her assistant, driver, friend, and housemate, Diana MacKown.

Louise considered her appearance to be part of her artistic expression, and she cultivated an extravagant personal style, including bulky jewelry, elaborate headdresses, and mink eyelashes for everyday wear. Her dramatic style captured public interest.

Our photos of Louise's work: