Deborah Butterfield is one of the most popular living American sculptors. It sometimes seems like every museum in the country has one of her works. Her sculptures are easy to like and instantly recognizable because they depict horses—an appealing subject—in a warm and sympathetic manner, as though each were a portrait of a special friend.

The mysterious part of Deborah's work is that while most of it appears to be made of driftwood and scrap lumber, it is actually made from cast bronze with a patina that matches the natural material exactly. The process is quite complicated. Deborah builds the original maquette from organic materials, then disassembles it, and covers each separate piece with a ceramic-shell molding material that is capable of picking up exacting detail. The wood is completely burned away during firing. The mold is then used for the bronze casting.

Deborah has loved horses since she was a child, and bought her first one while she was in college. For most of her adult life she has lived on a ranch outside Bozeman, Montana, where she keeps several horses of her own, boards others, practices her riding skills, and hosts horse-related events. Deborah identifies with horses and sometimes sees her sculptures as self-portraits. She also sympathizes with them and sometimes her sculptures reflect lessons that she has learned by interacting with them. Other times Deborah speaks of the horse form as an arbitrary choice that enables her to experiment with various materials, like a blank canvas.

In her treatment of horses, Deborah rejects the bold stallions of traditional equestrian sculpture and the association of horses with war. By using humble scrap materials—whether scrap metal or twigs and branches—Deborah creates humble images of docile mares who seem as vulnerable as people.

Deborah began exhibiting in the 1970s, and her work was quickly accepted. She has continued building expressive horses unto the present, when she is in her mid-60s.


Background: Deborah was born in San Diego, on the day of the 75th Kentucky Derby. Nothing is indicated anywhere online about her parents or upbringing.

Training: Deborah earned both a B.A. and an M.F.A. at the UC Davis.

Private life: In 1974, when she was 25, Deborah married an artist that she met while attending the University of California at Davis named John Buck. They have two sons. From 1976 to 1990, John was an assistant professor of sculpture at Montana State University in Bozeman.

John Buck is a very interesting artist whose work is as varied in form, content, and materials as Deborah's is unified. The few examples available on the internet suggest that his art is highly innovative and deeply thoughtful, but his work is not widely exhibited. Here is one of his most interesting pieces. It was advertised by the Greg Kucera Gallery in Seattle for $32,000.


Deborah and John divide their time between a ranch with separate studios for each near Bozeman, Montana and studio space in Hawaii. Deborah also must spend a lot of time in Walla Walla, Washington, where her foundry is located.

Our photos of Deborah's Horses


About the sculpture below, Deborah gets scrap metal by the ton from a salvage yard in Rockford, Illinois. When this pile of rebar arrived at her studio, with its large chunks of concrete still attached, she included it in the sculpture. 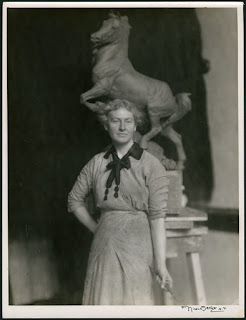 Anna Hyatt Huntington was the most prominent woman sculptor of the first half of the 20th century.

During the first 2 decades of the century Anna became famous for her animal sculptures, which combine skillful naturalism with vivid emotional depth.

She received critical acclaim at home and abroad, traveled widely, and won awards and commissions. She was active over a period of 70 years.

Background: Anna Hyatt was born in Cambridge, Massachusetts, the youngest of 3 children. Her father was a professor of paleontology and zoology, and his profession influenced Anna to specialize in animals. Her mother was an amateur landscape painter.

Training: She studied at the Art Students League of New York, and spent many hours doing animal studies in various zoos and circuses.

Career: In 1907, when she was 31, moved to Paris and set up a studio. There she modeled 2 jaguars that were exhibited at the Paris Salon.

The following year, Anna moved to Italy to work on a monumental sculpture commission, but she returned to France within a year or two.

Anna devoted herself to producing a life-sized equestrian statue of Joan of Arc. The model garnered an honorable mention at the Paris Salon of 1910 and led to her being offered a commission by the City of New York to reproduce it in bronze in honor of Saint Joan's five-hundredth birthday.

Around 1923 Anna was introduced to Archer Milton Huntington (1870-1955), son of railroad magnate Collis P. Huntington, and heir to his vast fortune. Archer devoted himself to cultural pursuits and his dream of founding a museum. He developed a particular interest in Spain and traveled there extensively. He also became a respected scholar, whose most notable achievement was a translation and critical edition of the medieval epic, The Poem of the Cid. El Cid was a Spanish cultural hero.

Archer was seeking a sculptor to make a heroic equestrian statue like Joan of Arc for the courtyard of Audubon Terrace, a property in New York where he was developing a multi-purpose cultural institution called The Hispanic Society. The society commissioned Anna to create a statue of El Cid.

In 1930, Archer and Anna purchased approximately 7,000 acres of former plantation land in the coastal region of South Carolina to provide a better winter environment for Huntington's illness. Anna and Archer turned the estate into a sculpture garden for the display of her works, and those of other traditional sculptors as well, called Brookgreen Gardens. When the grounds were opened to the public in 1932, it became the first modern sculpture garden.

In the 1940s, Anna did some relief sculptures for the Hispanic Society.

Anna was disgusted by the modern, abstract sculpture of the 1950s. She continued to have commissions for public works in a traditional, academic style. 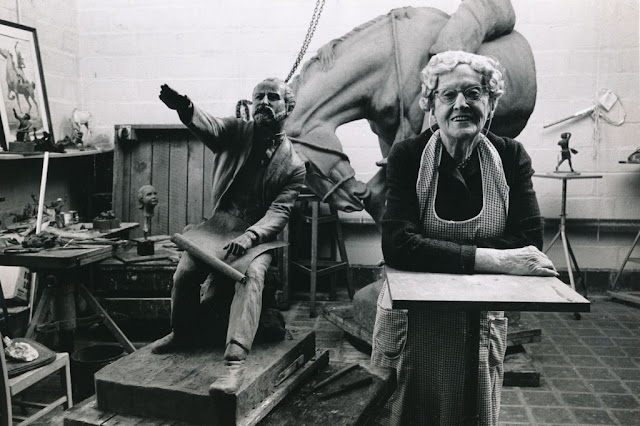 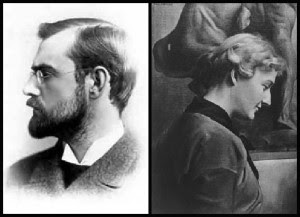 Anna Hyatt was a single career woman, aged 37, when she met Archer Huntington, aged 47, who had previously been married for over 25 years to an author.

When Archer and Anna first met, he said, “You look familiar.” Anna recognized him immediately and said, “Ah yes, the tall red-haired man. We’ve been riding the same train every morning.” Apparently they were fated to meet, and they were happily married for thirty-five years.

Anna characterized Archer as the ultimate sculptor's husband because he supported her work not only financially but emotionally as well as spiritually.

Huntington made a model of this statue while she was studying in Paris, and submitted it to the Salon. Because it earned an Honorable Mention at the Paris Salon, she was commissioned to complete a monumental version for Riverside Drive in New York City. At the dedication in 1915, the French Ambassador awarded her the Legion of Honor, and later she was made a member of the Legion.


Ursula von Rydingsvard is a world-renowned sculptor who carves abstract forms from massive stacks of red cedar planks. Her most famous works are monumental forms that resemble geological formations, landscapes, giant vessels or other objects with strong human associations.

She was born in Germany, but she spent her career in Brooklyn, New York.

Background: Ursula Karoliszyn was born in Germany to Polish parents, one of seven children. After several years in refugee camps, Ursula's family were able to leave Germany. In 1950, when Ursula was 8, they came to the U.S. and settled in Plainville, Connecticut, where her father worked in a tool-making factory.

Ursula says that while she doesn't think about the refugee camps while she works, she feels the influence of her time among the Polish peasants, and feels that working with wood is something her ancestors did for generations.

Training: Ursula studied art at the University of New Hampshire, and earned an MFA from the Columbia's Graduate School of the Arts in New York City in 1975.

Private life: Ursula met her first husband, Milton von Rydingsvard, while she was at the university. He was a premed student, and she followed him to Berkeley, CA, and Coral Gables, Florida, while he continued his medical studies. They had one daughter, Ursula Anne.

In 1985, when she was 43, Ursula married Paul Greengard, a neuroscientist and Nobel Prize winner.

Career: Ursula started her career in the 1970s when a type of art known as Minimalism dominated the world of sculpture. Pioneered by artists like Dan Flavin and Donald Judd, minimalists favored sparse, elemental forms, lacking in emotion, sexuality, and vulnerability. Here are examples of their work.

Ursula started out working with welded steel, in the direction of minimalism, but steel felt sterile to her. During her final year at Columbia she discovered red cedar planks. Red cedar is soft and aromatic, and for Ursula it was a way to oppose Minimalism with work that feels sensuous and emotive.

Ursula has milled cedar planks trucked from a saw mill on Vancouver Island in British Columbia to her huge warehouse in Brooklyn where she and her assistants laminate them into stacks and then use circular saws and chisels to further shape the form and add texture to the surface.

She uses the stacks of planks as a blank canvas that allows her to express a range of feelings and ideas. Though her shapes are abstract, they refer to natural phenomena.

Cedar is a fragrant wood that can cause allergies. Over the years, Ursula has become allergic to cedar dust and must wear a 15-pound suit with air pumped into it while she is working. Recently one of her works had to be removed from the lobby of a federal building because some employees reported serious allergic reactions.

In recent years, she has had some of her works translated into bronze from full-size cedar maquettes. She has also done some pieces in cast resin.

Ursula's career took off in the mid-1970s when she started exhibiting her new cedar works, and she quickly became successful. Her monumental outdoor works are favorites with American museums. She also does smaller pieces to hang on interior walls.


My photos of Ursula's Work:

The sculpture below is installed in front of Barclays Center, an arena for sports and entertainment in Brooklyn.


The sculpture below is electrified and illuminated from the interior, causing it to glow at night.

The sculpture below is the one that made workers sick. They removed the sculpture rather than improve the building's ventilation. The twisting and widening form evokes a tornado