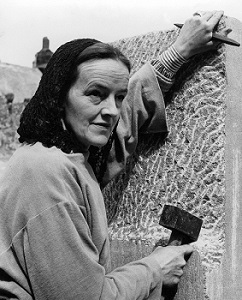 Barbara Hepworth was among the first artists in England to create abstract sculptures, carving original forms into different varieties of stone. She was a leading figure in the international art scene throughout a career spanning the 1930s through the 1960s and early 1970s.

Background: Barbara was born in Wakefield, in Great Britain. Her father was a civil engineer with the County Council.

Training: Barbara attended a Girls' High school, where she excelled in music.

A year later, she won a scholarship to the Royal College of Art in London; she was awarded a diploma in 1924.

While on a postgraduate fellowship in Italy, Hepworth learned to carve marble with master stone carvers.

Private life: While in Italy, Barbara met British sculptor John Skeaping and traveled with him to Siena and Rome. They were married in Florence, in 1925. In 1929, Barbara gave birth to their son Paul in London. In 1931, Barbara and Paul divorced.

In 1933, Barbara married the English avant-garde painter Ben Nicholson, with whom she lived and worked for the next two decades.

In 1934, Barbara and Ben had triplets. Barbara's son Paul from her previous marriage would have been about 5 years old. That means Barbara was raising children while she was making sculpture through the 1930s, when she was in her 30s.

In 1939, when WWII broke out, Barbara and Ben moved their family to St. Ives, on the far southeast coast of England. After the war, they became the hub for the next generation of artists in that area. Barbara lived in St. Ives for the rest of her life.

In 1953, Barbara's eldest son was killed in a plane crash while serving in the Royal Air Force in Thailand.

In the 1960s, Barbara's health began to break down, curtailing her work.

Career: After spending a couple of years in Italy, Barbara returned to London in 1926 to begin her career. She became one of a group of avant-garde sculptors committed to exploring abstraction in sculpture. Though her earliest works featured simplified, naturalistic forms, by the early 1930s, Hepworth was creating purely abstract work.

Early in her career, Barbara innovated an approach known as direct carving; instead of modeling a maquette from clay, and copying that in stone, Barbara attacked the stone directly, and let its qualities guide her search for form. Over the years, Barbara also worked in wood, and in the 1950s she began using bronze, which has the advantage that copies can be made. She sometimes incorporated strings, wires, and colored paint into her sculptures.

The peak of Barbara's productivity and popularity was in the 1950s. In the 1960s, her health began to fail, and she worked on smaller pieces.


Our photos of Barbara's work:

Posted by Jan Looper Smith at 3:45 AM